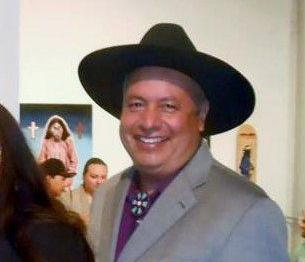 Roger Amerman, a Choctaw Tribal member, will speak at the Kooskia Community Center from 1-2 p.m. on Saturday, Oct. 12.

This event has passed

Roger Amerman, a Choctaw Tribal member, will speak at the Kooskia Community Center from 1-2 p.m. on Saturday, Oct. 12.

KOOSKIA – Friends of the Kooskia Library group will present a special program featuring Roger Amerman on Saturday, Oct. 12, from 1-2 p.m., at the Kooskia Community Center (26 S. Main Street). Refreshments will be provided after the presentation.

Amerman, a Choctaw Tribal member, is a nationally renowned beadwork artist, a geologist and ecologist. He is an engaging storyteller, having presented numerous interpretive programs about the natural world while he worked for the National Park Service. In addition to being part of the Choctaw Nation in Oklahoma, he has lived among the Yakima and Umatilla people in eastern Washington and the Nez Perce people. Amerman lives with his wife Carolyn, a Nez Perce tribal member, and their youngest son, Preston, near the South Fork of the Clearwater River.

His presentation will focus on the plant species important to the tribes of the Columbia Basin, with the Kooskia area considered the eastern edge of the Basin. He will weave his knowledge of ecology, geology and culture to describe how Native American people traditionally use plants and where they are found on the landscape. Plants are culturally important for food, building structures, medicine, religion and the arts. He explores the social aspects of plants and their role in culture. Instead of being named after people, traditional native place names may reflect a plant or animal species found there and the importance to the native people.