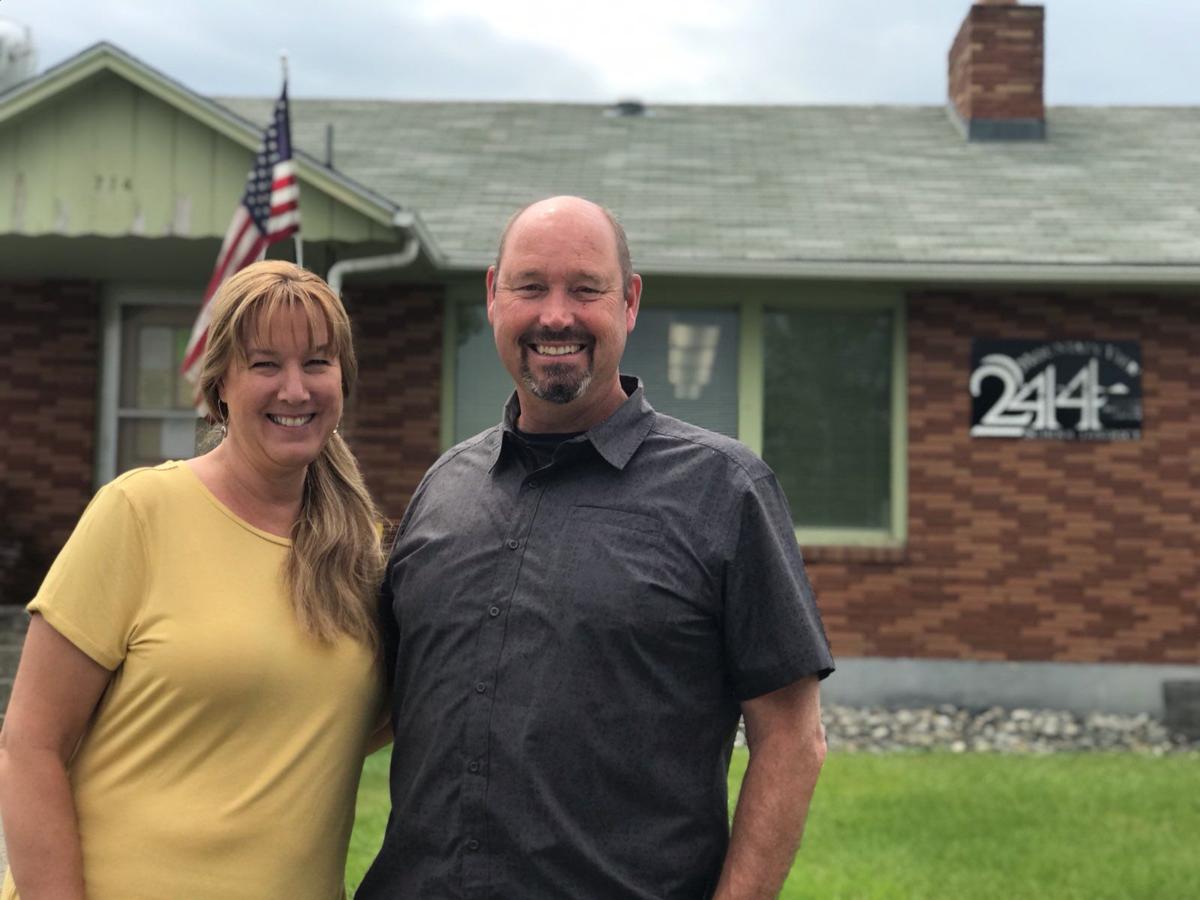 Julie and Todd Fiske purchased a home in Grangeville where Todd is the new MVSD 244 superintendent. They are shown here outside the district office in Grangeville.

Julie and Todd Fiske purchased a home in Grangeville where Todd is the new MVSD 244 superintendent. They are shown here outside the district office in Grangeville.

GRANGEVILLE – A life change for Todd Fiske precipitated an even bigger adjustment for his entire family.

When the school he was working at, Summit Preparatory, in Kalispell, Mont., was going to close, he interviewed for the superintendent position in Mountain View School District 244 and got the job.

The road that led him to Grangeville, however, began a few decades ago in California, where Fiske was born.

“Our family moved to Western Oregon, a little town called Scio, population 480,” he said. It was there that his family operated a small sheep farm and where he would meet his future wife and graduate from high school.

“I tackled Julie in third grade,” he joked. “But that’s another story.”

Apparently, she did not hold it against him: the couple will celebrate their 30th wedding anniversary in March 2021.

Following high school, Fiske began college where he planned to study resort management. An opportunity took him out of school early and allowed him to move to Hawaii and work at a high-end resort.

“I was a bellman – yeah, I basically carried people’s bags,” he laughed.

But he also earned an advanced scuba diving certification and worked for one of the resort concessions.

“I was able to dive at least twice a day, so it was all worth it,” he said, for a total of about 300 dives while living in the Aloha state.

While Julie finished school in Hawaii, another opportunity came up.

“We bought, sight un-seen, a mom and pop motel in Kalispell in 1990,” he said. They owned the 20-room business for just more than a year when his mom’s words began to ring in his ears.

“She had expressed some disappointment in me not finishing college, and I kept hearing her say, ‘If you quit, you’ll never go back,’” he recalled. “It was those words that drove me.”

He attended Montana State University – Northern and obtained his elementary education degree. He went on to teach middle school health and physical education, as well as industrial arts. He later earned a master’s degree in educational leadership to become a K-12 principal, and obtained his certification as a superintendent, all at the University of Montana. From there, he went on to work as principal and superintendent at West Valley, on the outskirts of Kalispell, for 12 years.

Following this, and up until taking the MVSD job, Fiske served as superintendent, principal and executive director at Summit Preparatory School, a therapeutic boarding school.

“It was a great experience – but COVID helped to shut down the school,” he explained. Since students attend from not only Montana, but various other states, and travel and boarding were squashed, the school closed.

“So, we began to make some enormous changes,” he said.

He interviewed and received the job in Grangeville – a town he had driven through may times before – and began to make plans to move to the area.

“We lived in our home in rural Kalispell for 30 years, making it uniquely ours with a variety of projects,” he explained. “We were fairly surprised when it was on the market for nine hours and sold.”

Due to the timing, Julie, a special education teacher in Kalispell, had already signed her contract for the coming school year.

“She’s going into her 31st year of teaching and is very dedicated,” Fiske explained. “We both knew she needed to honor that contract.”

So, although the Fiskes have purchased a home in Grangeville and the family has spent a portion of the summer here, Julie and the couple’s son, Alexander, 25, will spend the next nine months in Kalispell before permanently making Grangeville their home. Daughter, Abigail, 22, is a student at the University of Montana, and plans to be married next summer.

“And Dexter the Goldendoodle will be here permanently when Mom and Alex are here,” Fiske laughed.

Fiske said this will be the first time the family has lived in town.

“People have been so warm and welcoming, the neighbors have been great, just everyone,” he said. “I am enjoying the view of Three-Mile Creek on our property, and Dexter loves it.”

“We’ve been doing some exploring in the past few weeks, and it’s beautiful here,” he said.

In Montana, Fiske, a high school basketball player, spent 30 years as a referee and was heavily involved in training others to be officials. Though he said he will not have time to be a referee in Idaho, he has another hobby he will continue to pursue.

“I’m a weekend woodworking warrior,” he smiled. “I enjoy projects, and I’m sure we will have some.”

As for his job as MVSD superintendent, he has jumped in in the deep end already with board meetings, negotiations and COVID school re-opening guidelines, not to mention getting his footing in not only a new district, but a new state.

“There are, as I said, enormous changes for me, for our whole family,” he said.

Fiske said he looks forward to integrating into the community and building trust and relationships within the district.

“I function on a high dose of hope – but not the ethereal type of hope,” he said. “The hope that takes hard work to make changes and move forward.”

“I want to build a trust with people so that, even in the times they don’t agree with me, they will have enough trust that I am making the best decisions possible for the best reasons, that we can keep moving forward together,” he stated.

However, he knows he cannot do it alone.

“We will all have to put in some heavy lifting,” he emphasized.

Fiske can be reached at fisket@sd244.org.