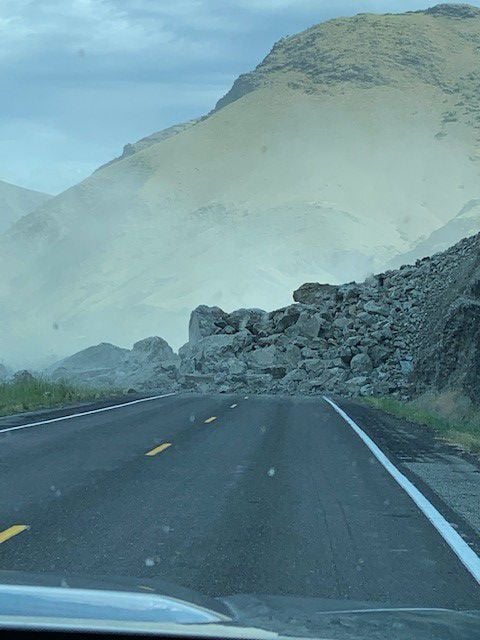 A debris field of rock had freshly come down at Pollock on U.S. Highway 95 Friday morning, encountered by northbound Boise motorist Jana Pharmer. “Only 30 minutes from the cabin this happened right in front of us - literally 30 seconds. Very close call! Glad to be alive!” she said. 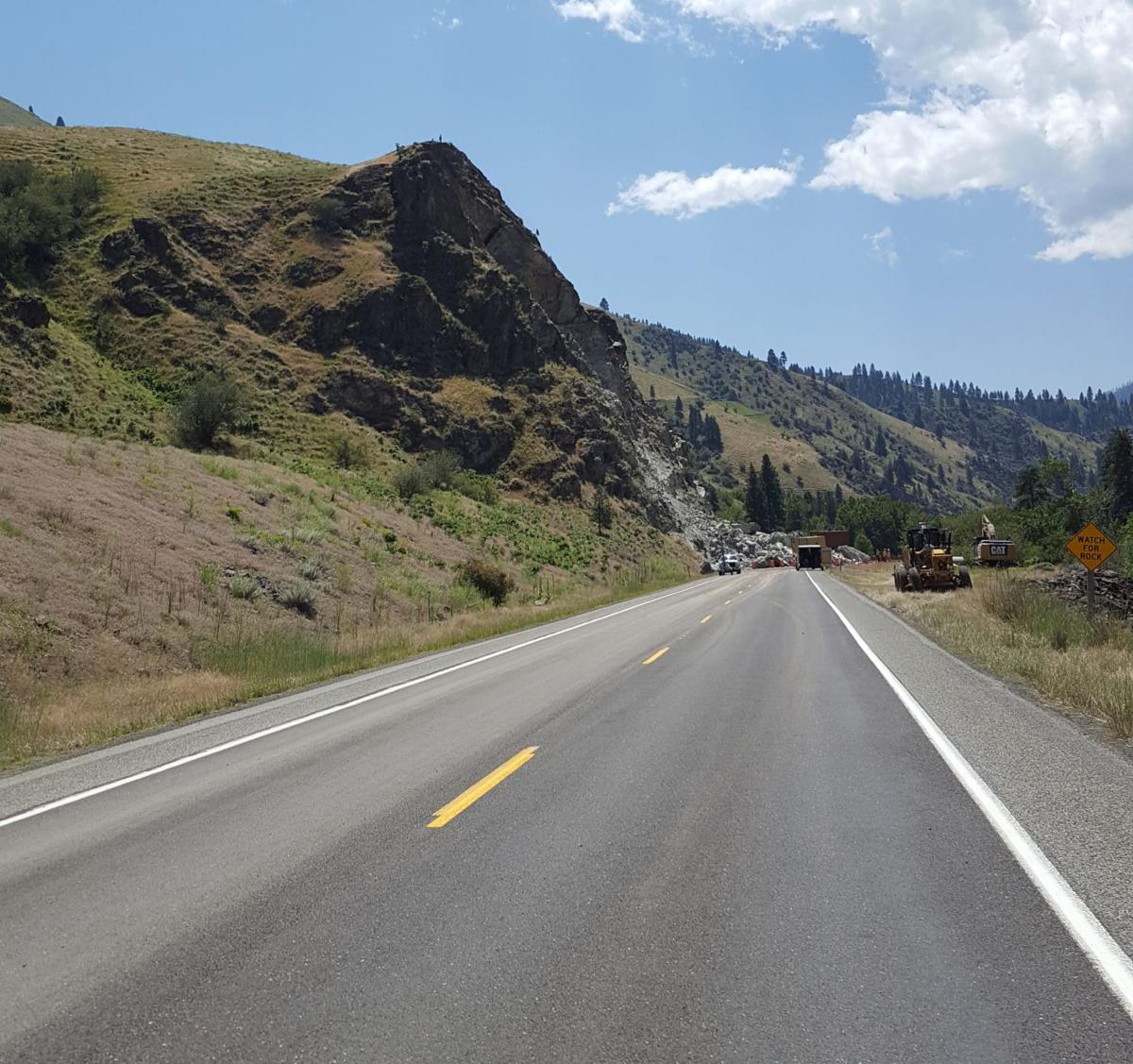 ITD crews were scaling rock on Monday, July 6, at the Pollock slide on U.S. Highway 95.

A debris field of rock had freshly come down at Pollock on U.S. Highway 95 Friday morning, encountered by northbound Boise motorist Jana Pharmer. “Only 30 minutes from the cabin this happened right in front of us - literally 30 seconds. Very close call! Glad to be alive!” she said.

ITD crews were scaling rock on Monday, July 6, at the Pollock slide on U.S. Highway 95.

According to the Idaho Transportation Department, the opening will be only during the day to allow observation of the slope. Hours are 10 a.m. to 8 p.m., and are subject to change.

Meanwhile, ITD crews have closed Old Pollock Road to add gravel and install culverts to help the county repair it for local and commuter traffic. Work is expected to take up to two days.

“This is not suitable for commercial traffic; no trucks can run on this even after it is repaired,” said Megan Sausser, ITD public information officer. The emphasis for Old Pollock Road is to provide a route for commuters in the area and that, “even with the improvements, it is not comparable to 95.”

The Wednesday opening was determined following the evaluation of geotechnical experts yesterday and positive results from continued monitoring.

U.S. 95 has been closed to traffic at Pollock since last Friday morning, July 3, when tons of debris slid away from the rock face at milepost 188, covering both lanes in a slide 120 feet long and 40 feet deep at its base. Rocky debris has been substantial in size; one of the biggest rocks to come loose measured at 25 feet across and almost as deep.

Slide cause is as yet undetermined, and ITD stated recent rains could affect the stability of the slope.

“We’re getting a lot of questions on whether earthquake activity was the cause,” Sausser said, saying that ITD is considering all the possibilities. A determination on this may come out in a report later this week. “It’s been an unusually wet spring for this area,” she said. “That’s our best guess at the moment.”

With the high volume of traffic for the July 4 holiday, some motorists attempted to use French Creek Road on the Payette National Forest as a bypass. The Forest Service stated, as a result, it has already experienced multiple driveoffs by those attempting the narrow, high-clearance road. Sausser said that due to concerns from Valley County, ITD signed the road Saturday for it not being a recommended bypass, and took that signage down Tuesday when traffic leveled off.

“Generally speaking, there is no official bypass; that’s why we’re building a road,” Sausser said. Motorists are advised to wait until a route is built around the slide: “That is the best route for all types of traffic. If you are a local commuter and you need to pass through in the meantime, Old Pollock Road would be the best option for you.”

“We saw the huge dust cloud right in front of us,” said Jana Pharmer, who was on her way from Boise to their cabin in White Bird last Friday morning, when they came upon the incident. “We couldn’t really see the rocks coming down. It takes your mind a second to grasp what’s going on. It happened seconds before we actually got to the spot. Rocks hit a car headed south, and they barely made it through before the whole mountain came down.”

Pharmer said they took the French Creek Road “cow path” from McCall to their cabin, turning their normal three-and-a-half to four-hour trip into eight hours.

ITD shut down the highway between mileposts 186 and 190, with work to clear the debris field hampered by the threat of the continually moving slide, located in an area known historically for such activity. Electronic advisory signs are located at Lewiston and New Meadows (milepost 161), and barricades are in place at New Meadows and milepost 190.

For updates, drivers should download the 511 app, follow ITD on Facebook and Twitter and pay attention to signs in the area. Note that information on 511 is only updated if there is a change to the conditions of the highway.