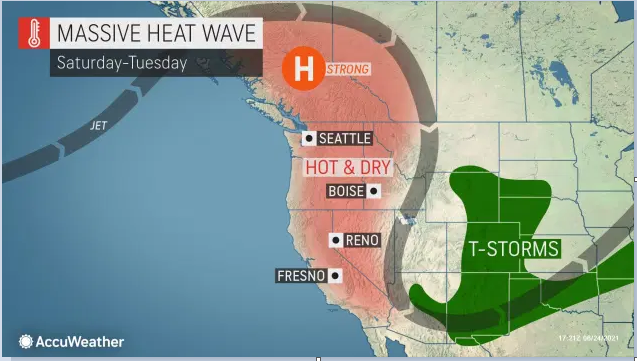 A weather map of the massive heat wave to be enveloping the Pacific Northwest, Saturday through Tuesday. 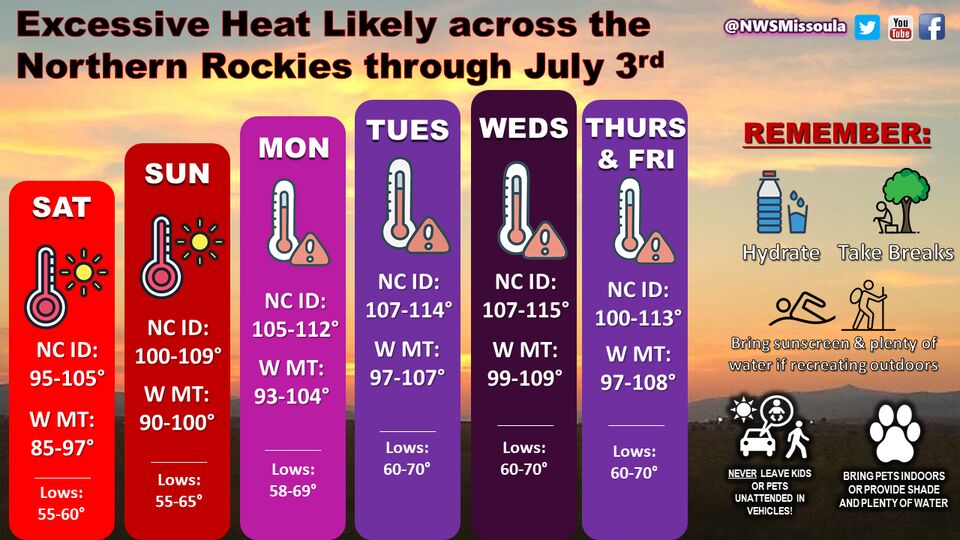 High confidence exists that a prolonged period of high temperatures in the 90s to 110s (and low temps in the 50s and 60s) will exist through at least July 3rd across the entire Northern Rockies.

A weather map of the massive heat wave to be enveloping the Pacific Northwest, Saturday through Tuesday.

High confidence exists that a prolonged period of high temperatures in the 90s to 110s (and low temps in the 50s and 60s) will exist through at least July 3rd across the entire Northern Rockies.

“This is not your average summer heatwave,” marks the National Weather Service office in Missoula, as the North Central Idaho area braces along with the Northwest for a prolonged period of excessive heat that is expected this Saturday and will continue through late next week (Saturday, July 3).

According to NWS, North Central Idaho and select northwest Montana valley temperatures of 100 to 117 degrees will exist during the daytime hours, with low temperatures ranging from 60 to 70 degrees.

For Idaho and Clearwater counties, NWS has high confidence of daytime temperatures of 100 to 113 degrees, particularly Sunday through Thursday, July 1.

According to NWS Missoula, “While temperatures will certainly begin to rise and become hot on Friday and Saturday, the most concerning time period for the hottest values will occur Sunday through Thursday, July 1. The prolonged nature of temperatures of 100 degrees and higher, along with little relief in the way of cooling temps overnight, is what sets this heatwave apart from others.”

As of Friday, June 25, NWS listed an excessive heat warning for the Grangeville and Camas Prairie region, Lower Hells Canyon and Salmon River Region, with dangerously hot conditions— temperatures up to 115 degrees in lowest elevations and 108 degrees expected in the Camas Prairie. This warning is in effect from 11 a.m. on Saturday to 7 p.m. on Thursday.

Fire management officials and cooperators from multiple agencies across North Central Idaho are monitoring fuels and fire conditions very closely, according to the Nez Perce - Clearwater National Forests. A dryer-than-normal spring combined with forecasts for extended high pressure and potentially record-breaking high temperatures this coming week increase the wildfire danger potential in the area and emphasize the need for everyone to take extreme care with any outdoor activities that may cause a spark.

Land managers are discussing the potential need for implementing fire restrictions in the area due to this increased fire danger.

“Even though we are not quite at the threshold for implementing fire restrictions just yet, we are closing in quickly, and have to understand all of the current conditions that factor in,” said Barry Ruklic, Deputy Fire Staff Officer for the Nez Perce Clearwater National Forests. “These conditions can change rapidly this time of year, especially with the given hot, dry weather forecasts over the next couple of weeks.”

Local officials will continue to monitor fire conditions as they develop and urge the public to be extra cautious this time of year when working or recreating outdoors.”

KAMIAH — An open burn ban is enacted as of Friday, June 25, for the City of Kamiah and Kamiah Fire Protection District, under the joint powers agreement of Kamiah Fire-Rescue.

This is due to the current risk of wildfire within the wildland-urban interface (WUI) in the Kamiah area is higher than normal. This is due to the lack of moisture, the extreme heat affecting the area during the present and future, and the area’s live and dead fuel moistures are drastically changing to promote rapid fire growth.

The burn ban is in effect until Oct. 1, or until rescinded by the fire chief. This is being done in working with Idaho Department of Lands, Nez Perce Tribe and other land management agencies.

Exceptions are for those with a written permit; those using fire fueled solely by liquid petroleum or liquid petroleum gas fuels, with such devices (including propane patio fire box, contained briquette) being used only in area cleared of flammable material.

In response to dry summer conditions and increasing wildfire danger in the region, Avista is undertaking temporary changes to power line operations in its Idaho and Washington service area.

These temporary changes are being made to decrease the potential for wildfires that could occur when re-energizing a power line. In most cases, lines located in rural and/or forested areas are normally re-energized automatically. However, during the current dry weather conditions, Avista’s line personnel will physically patrol an outage area before a line is placed back into service. This can require more time to restore service but decreases the potential fire danger.

This operational approach is called dry-land mode. Avista is expanding dry-land mode this year by pairing it with a fire-weather monitoring system. This allows system operators and field managers to make better informed decisions on a more targeted geographic basis.

A heatwave, combined with low water conditions and population growth, is ramping up electrical use across the region.

Multiple days of triple-digit heat around the West are straining the regional energy grid as air conditioners and irrigation systems work overtime. Idaho Power is preparing for increased demand for energy as the area experiences sustained near-record temperatures in addition to unprecedented growth. The company is asking customers to help.

Idaho Power is asking customers who can safely do so to reduce their energy use from 4 to 9 p.m. during the next several days. Conserving energy during these hours of highest demand, and when solar power is fading, can help prevent reliability issues due to the region-wide strain on the grid.

The potential impacts of the heatwave are intensified this year due to drought and a shortage of regional transmission connections outside our system to move energy where it’s needed.

The Pacific Northwest is bracing for what is expected to be a historic and “life-threatening” heat wave, the likes of which — in terms of high temperatures and duration -— has never been experienced before in that part of the country. AccuWeather forecasters are calling for record-shattering heat to envelop the region through the weekend and linger into next week, not only making life miserable for a part of the country where air conditioning is not prevalent but also posing a significant health risk to millions.

Following a cooler stretch of weather, the dangerous heat is forecast to peak from Saturday through Monday as high pressure settles in and enables temperatures to climb to new heights.

“There are typically a few rounds of heat in the Pacific Northwest each summer, but this particular heat wave looks quite extreme,” said AccuWeather Meteorologist Brian Thompson, who regularly analyzes weather patterns in the West.

This extreme heat will be the result of a large northward bulge in the jet stream.

“When the jet stream behaves this way, the air at mid- and upper levels of the atmosphere becomes very warm,” explained AccuWeather Senior Meteorologist Alex Sosnowski. This upper-level heat can allow the surface to easily heat up.

“Heat can be especially dangerous in the Pacific Northwest because air conditioning is not as common as the rest of the country,” said Thompson.

How to weather heat wave

Drink plenty of fluids, stay in an air-conditioned room, stay out of the sun, and check up o…