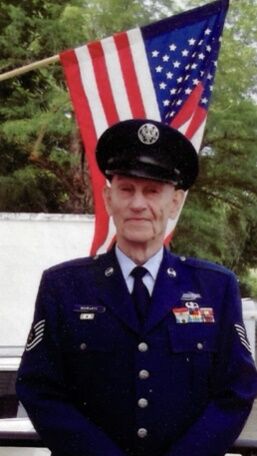 Tom was born at his grandma’s home in Spokane, Wash, Dec. 14, 1923, to Charles Edward and Theodisia (Ewing) Schwartz. The family was later joined by a younger sister, Dolores Juanita (Rome).

As a youngster, Tom and his family lived in Winchester Idaho, then Clarkston Wash, Five Mile Falls, Yakima Wash, then to Riverside, Calif., where he attended Polly Technical High School. Tom enjoyed machine shop, where he made a couple of guns and then helped build Track Houses for a local contractor as the school shop project.

At age 18, he went to Nelson, Nev, to work in the silver mines-- then Boom-- the draft to WWII. He actually went back to Calif., to enlist in the Army Air Corp so he would be sent to South Pacific not to Europe to shoot his German relatives. He went to the South Pacific in combat infantry on Okinawa. After the war, he stayed in the military. In 1947, Army Air Corp changed to Air Force. Tom spent many years and war times overseas before retiring as a Tech Sargent from Hill Air Force Base in 1965.

At age 24, after shortly dating, Tom knew he was supposed to marry Elsie Ruth DeLong. She was born in Dawson, N.M. but they met in California. They married Aug. 18, 1948. He was a corporal at Hill Air Force base at the time.

After retiring, Tom moved his family to California where he worked the alignment pits in Riverside with his dad and brother-in-law, Richard Rome, until he got tired of California and “shipped out to live in Idaho.” Tom had hunted in Idaho since 1971. He and Elsie bought a small house from Earl and Edie Hughes in 1972 then moved to the area in 1976. Tom and Earl became the best of friends and created many memories together with Dwight through the years.

Tom’s passions were simple: Studebakers, hunting, and dancing. Tom (known as Clyde to some) could tell you everything there is to know about every part of a Studebaker and its motor. He had his favorite hunting stories that involved nephew, Charles (Weird Harold), Buffalo Hump with Charlie and the guys, or with Earl and Dwight Hughes.

When Elsie passed away after 53 years of marriage, Tom spent time listening to his favorite music and then started dancing again. He could still wear his original uniform and he wore it proudly to visit veterans in local hospitals and rest homes. He would wear his uniform dancing occasionally and in turn would know when he “had backup”, for example, the Marines at Elk City Days in 2012.

Tom is proud to be the oldest male in both Schwartz and Ewing history and was “still kicking at 96!”

Tom may not have been a huggee, gushy sort, but he certainly kept track of all of his kids and grandkids and their activities. He was excited when they came to visit and looked forward to hearing from all of his people. Tom was able to remain in his own home throughout his life. Only until the last few months did he require more assistance. Tom wanted to thank Syringa Hospice (Cindy and Tara) and their fantastic nurses (Leslie, Krystina, Haley) and CNAs (Linda, Rita) for their assistance and attention that enabled him to remain in his own surroundings. He wanted to thank Maude for all of the good grub and friendship all these years especially since Elsie passed away. And Thank Dwight and Lorinda for being with him morning and night or one phone call away when he needed them. Tom and his family would especially like to thank and recognize Erica Eller for attending to and caring for Tom in his last days (he enjoyed it).

When Tom and I started writing his obituary (instead of his horoscope), he figured 96 years should probably require an entire page of the newspaper but he figured we should narrow it down to some highlights because those who knew him would already know some of this stuff, and those who didn’t -- well they had already missed out.

On Thursday, Oct. 22nd there will be a viewing from 1-4 p.m. at the Blackmer Funeral Home with a Rosary to follow at 5 p.m. Friday, Oct. 23rd, there will be a military graveside service at 3 p.m. at the White Bird Cemetery. Arrangements are under the direction of Blackmer Funeral Home, Grangeville. Send condolences to the family to blackmerfuneralhome.com.

In lieu at flowers, Tom’s favorite charities were Toys for Tots and St Jude’s.