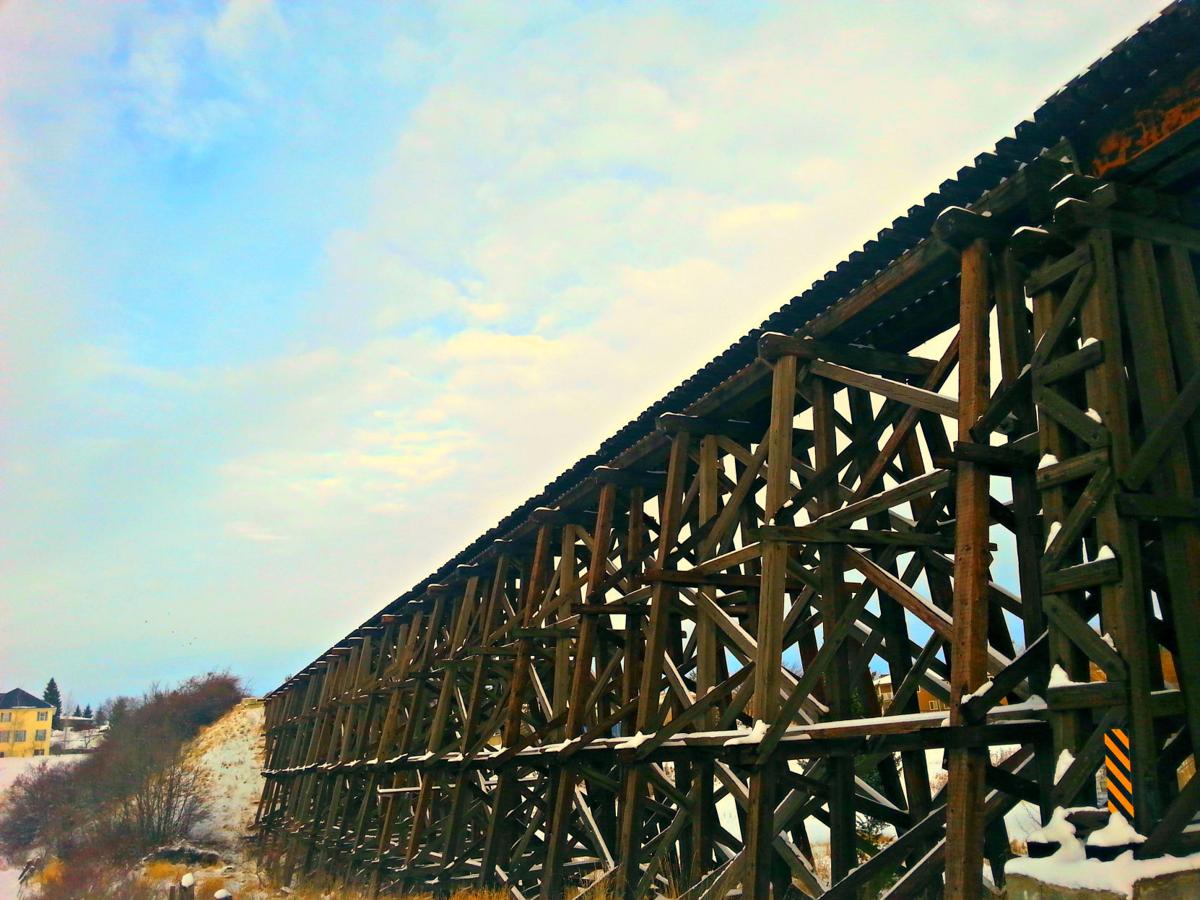 The Cottonwood train trestle and tracks that run through town just past toward Keuterville may not run with trains anymore, but this wooden piece of architecture offers aesthetically pleasing eye-candy, especially on a blue-skied day. 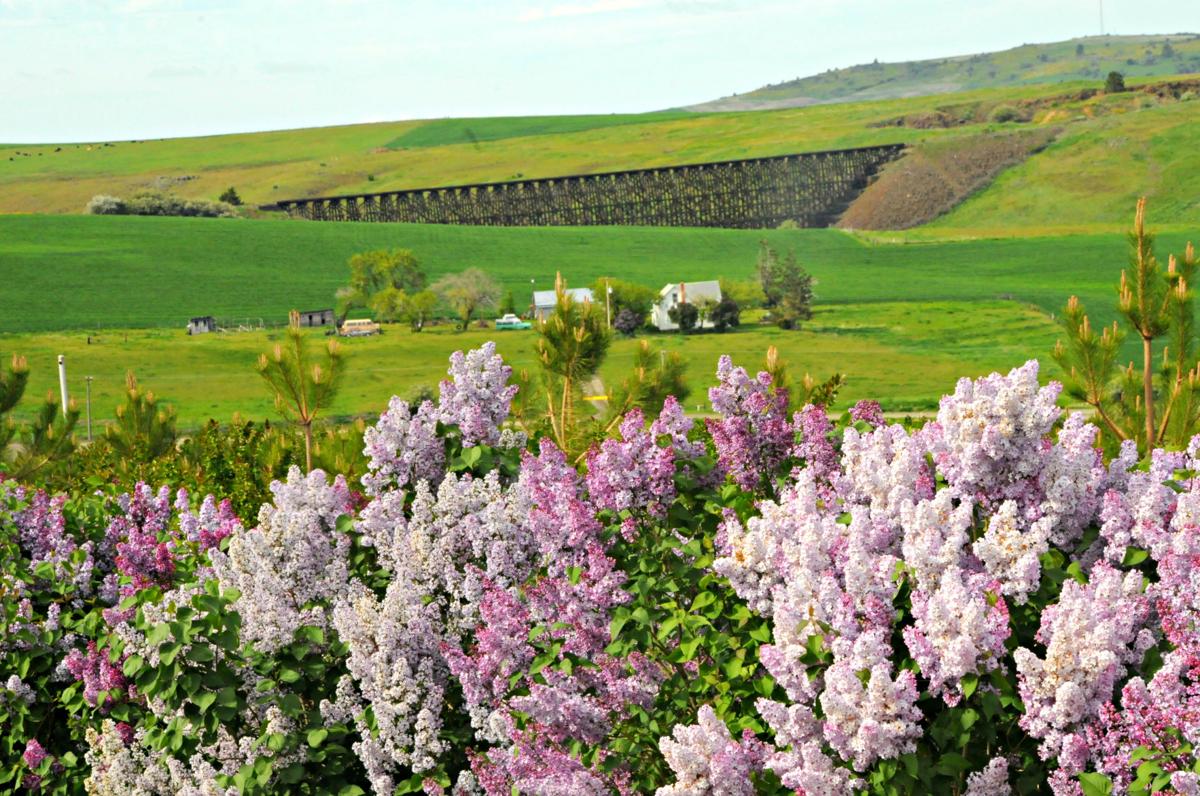 The old wooden train trestles can be seen over a blooming hedge of lilacs as seen from Summit Academy on Substation Road in Cottonwood. 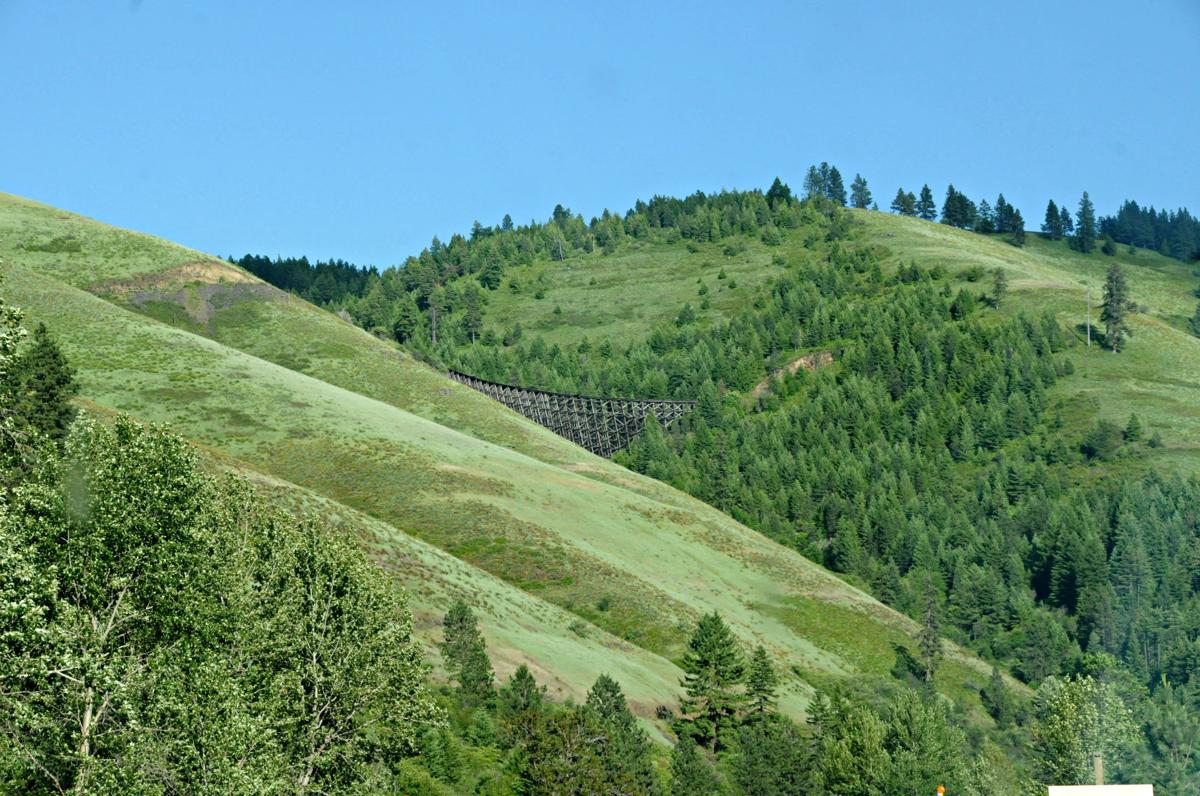 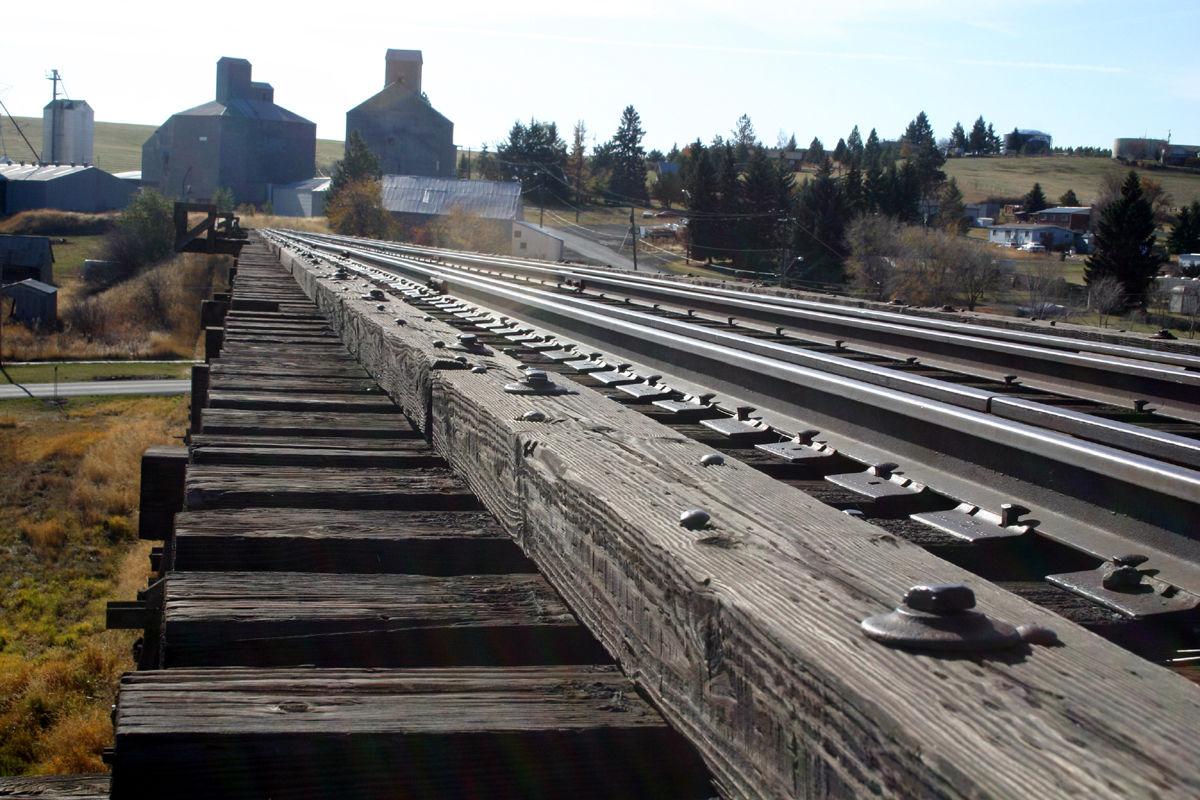 View of Cottonwood from the trestle. 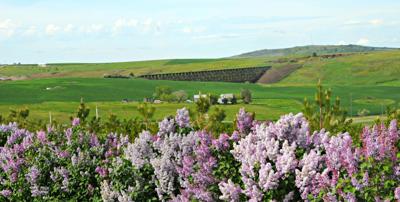 Imagine a ride through the wilds of Idaho, into rugged train, dark canyons and scenic countryside.

The Camas Prairie Railroad has been called the offspring of a unique “wedding of the rails” between the Union Pacific and Northern Pacific railroads in 1909.

According to the CPR’s history, a 999-year agreement between the UP and NP, signed in September 1909, ended years of fighting about railroad rights in Idaho’s heartland.

Finally, a joint venture built 150 miles of tracks and lines from Lewiston and other area were connected to tracks stretching through Grangeville and Stites.

Each railroad was to lobby for business independently and shares costs of personnel and shops. According to a Lewiston Tribune article in 1961, 14,000 carloads of lumber a year were coming from Headquarters and going to a variety of towns including those on the Camas Prairie, Kooskia, Kamiah, Lewiston and Clarkston (then called Vineyard).

Original construction of the line through the rugged terrain of North Central Idaho was not easy, with more than 100 trestles needing to be built. The CPP was known as the "railroad on stilts" due to the many wooden trestles. In one five-mile stretch, there were more than a dozen trestles.

The CPP was built to tap the plunging, fertile rich of the Camas Prairie and the timber of the woodland hills and canyon lands of the Clearwater River. Service to the south terminus of the second subdivision line at Grangeville commenced in December 1908 and continued for 92 years.

CPP was sold to North American RailNet in April 1998, and it became the subsidiary Camas Prairie RailNet, Inc. (CPR). After less than two years, CPR notified the U.S. government in late 1999 that the second subdivision line to Grangeville could be subject to abandonment, citing lack of profitability. It made its formal request in May, and it was approved by the Surface Transportation Board in September 2000. The last run to Fenn and Grangeville was on Nov. 29. The tracks were to be removed shortly thereafter, but that was delayed as a new operator for the line was sought.

When Bountiful Grain and Craig Mountain Railroad (BG&CM) stepped in to control the second subdivision line in December 2002, it was originally only to extend from Spalding to Craigmont, but a few weeks later decided to continue south, across Lawyer's Canyon to Cottonwood, stopping the salvage crews from going further north. The tracks from Cottonwood to Grangeville were removed and salvaged in late 2002 and 2003. North American RailNet sold the remainder of the railroad to Watco Companies in March 2004, which renamed it the Great Northwest Railroad.

The 1975 film Breakheart Pass starring Charles Bronson was filmed on portions of the railroad, as were parts of 1999's Wild Wild West.

CRAIGMONT – Although it may sound as if a band of attorneys traveled through the treacherous terrain, this canyon along Lawyers Creek in the middle of the Camas Prairie was actually named for a Nez Perce Indian.

Hallalhotsoot was nicknamed “Lawyer” by area mountain men because of his shrewd mind and combative nature.

The historic canyon, creek and railroad trestles can be viewed from the historic lookout at in North Central Idaho, between Ferdinand and Craigmont off U.S. Hwy. 95.

~ From Idaho, Adventures in Living http://www.visitidaho.org/attraction/natural-attractions/lawyers-canyon/