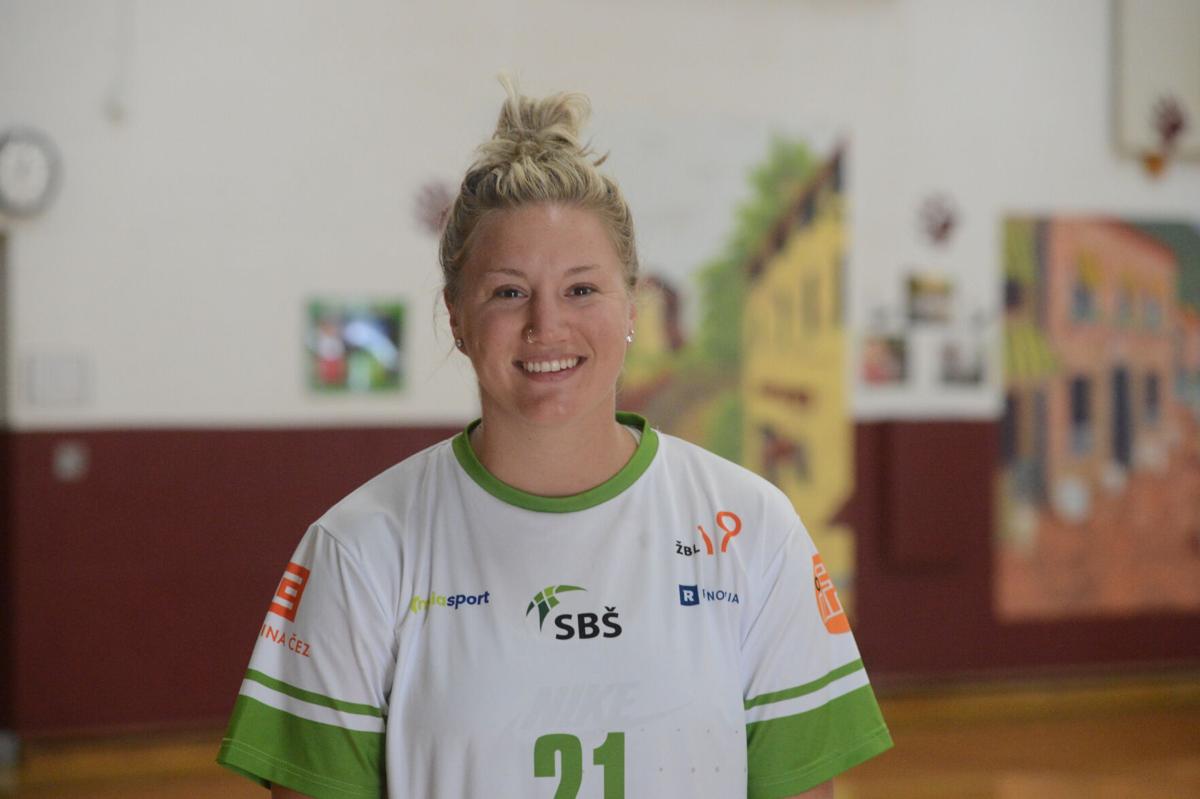 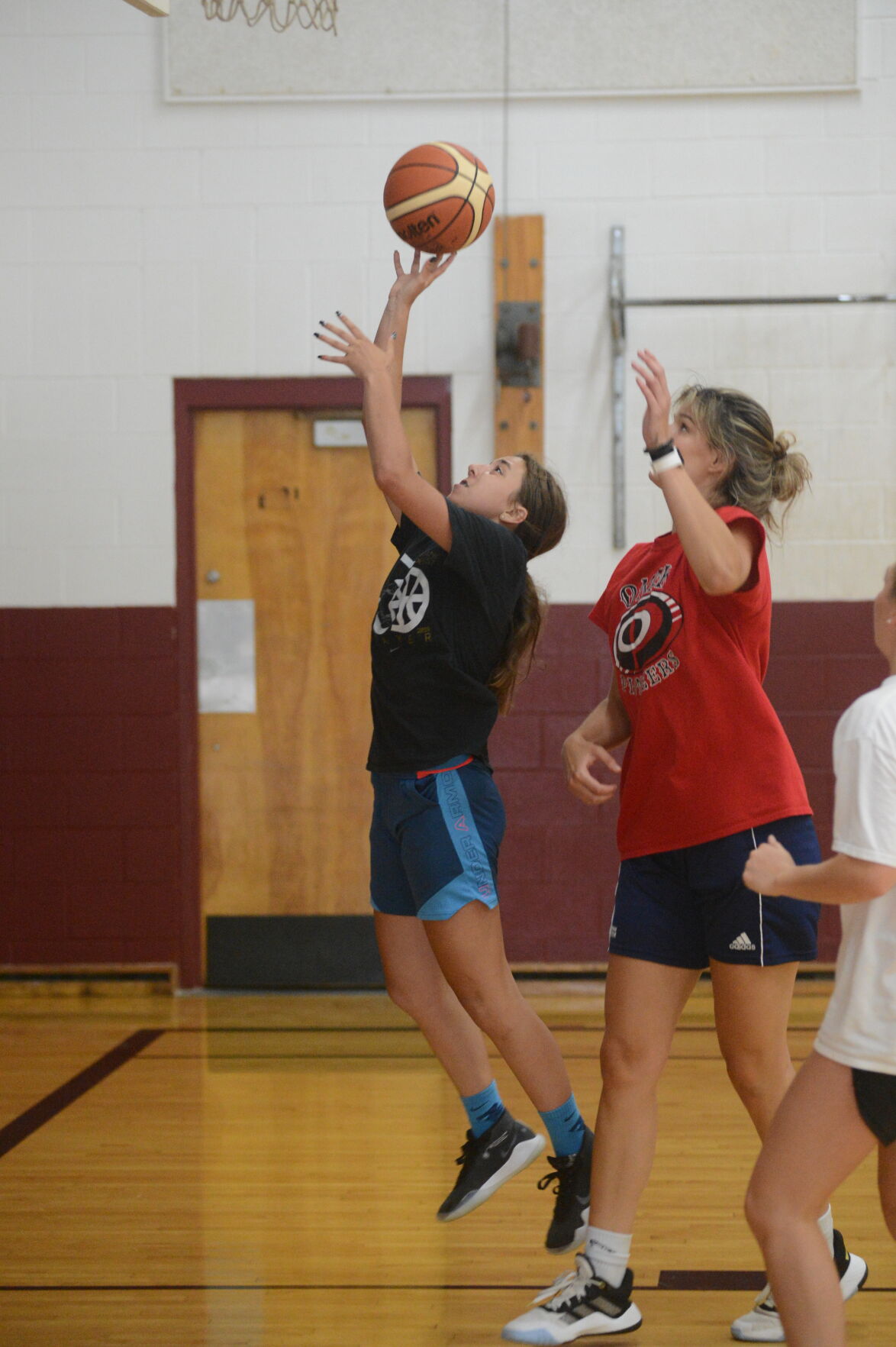 Ashlyn Schoening got her shot up a step ahead of European professional Nevena Marcovic, who took it easy on the kids during a basketball camp held July 22-23 at the multipurpose room adjacent to Kamiah High School. 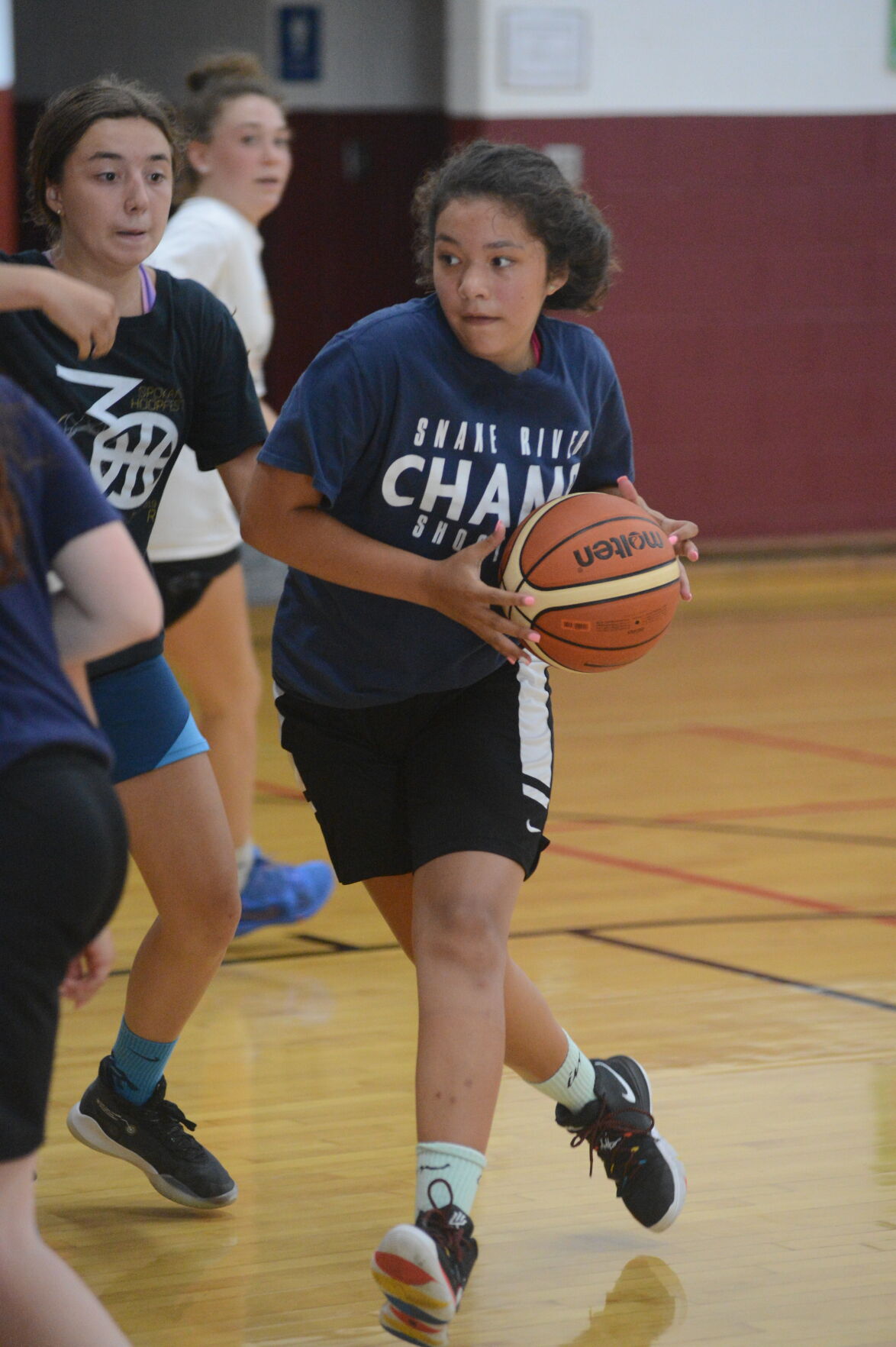 Mariah Porter got past a defender with a quick move off the dribble during a basketball camp held July 22-23 at the multipurpose room adjacent to Kamiah High School.

Ashlyn Schoening got her shot up a step ahead of European professional Nevena Marcovic, who took it easy on the kids during a basketball camp held July 22-23 at the multipurpose room adjacent to Kamiah High School.

While European women’s basketball pro leagues – like so much else in the world – have been disrupted by the COVID-19 pandemic, Cloninger and two of her pro teammates are on this side of the Atlantic.

So, last week, they put together a basketball camp for local girls.

With little notice, they had about 10 locals show up for drills and simulated game action July 22-23 at the multipurpose room adjacent to the high school from which Cloninger graduated in 2013.

“It’s a start,” she said. “I'm thankful for this community letting me get with these girls and trusting me to actually teach them something. And, you know, I bet a lot of those girls would come back for another one next year – and maybe some of the other communities would have their girls come out, too.”

Having led the Kubs to a state championship her senior year, she raised her game, playing college ball with the likes of Jen Schlott at Utah State and Alysha Devine at Alaska-Anchorage.

“Jen Schlott is the best basketball player I’ve ever played with,” Cloninger said. “She’s a little point guard from Arizona, I think, and I just remember that nothing fazed her. You could hit her as hard as you could in practice and she’d just come back 10 times harder. … She’s in her 30s now, still playing professional basketball, and still playing like a star.”

“Alysha Devine, she was the hardest worker I’ve ever played with,” Cloninger said, “and that is what Alaska was all about – working harder than everyone else and doing things in training nobody else in the country was doing.”

Last year, Cloninger joined the SBS Ostrava team that plays in the Czech Republic, and she found it to be a bit of a culture shock.

“The difference with pro ball is, in Alaska, we could be more physical than other teams, but we didn’t have anything like the competition overseas,” she said. “There were times I couldn’t do anything. My first game, I played against this girl who was like 6-7. I would get the rebound, but she would reach over me and grab it out of my hands – and ‘over the back’ is another thing over there.”

Apart from that, she said, the biggest adjustment was from the structuredness of the college programs to the hands-off approach pro coaches take toward their players.

“Pro ball is what you make of it,” she said.

Also on hand for the camp were Sara Dickey and Nevena Marcovic – Cloninger’s teammates in the Czech Republic.

“They just mean a lot to me,” she said. “My old college basketball coach always said some of your teammates from high school will be your bridesmaids, and some will be the teammates that you have after high school.”