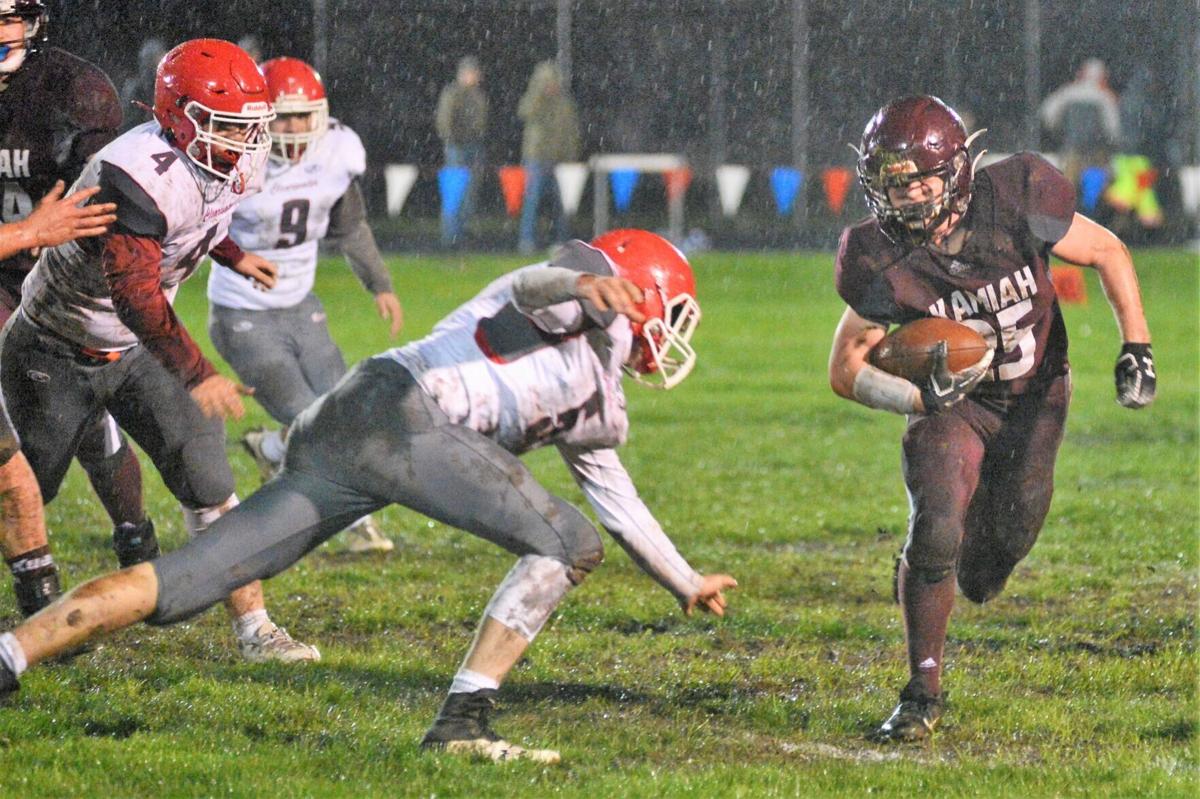 Kamiah's Colton Sams got past Clearwater Valley's Laton Schlieper on this play during Kamiah's 16-0 win over CV Oct. 23. 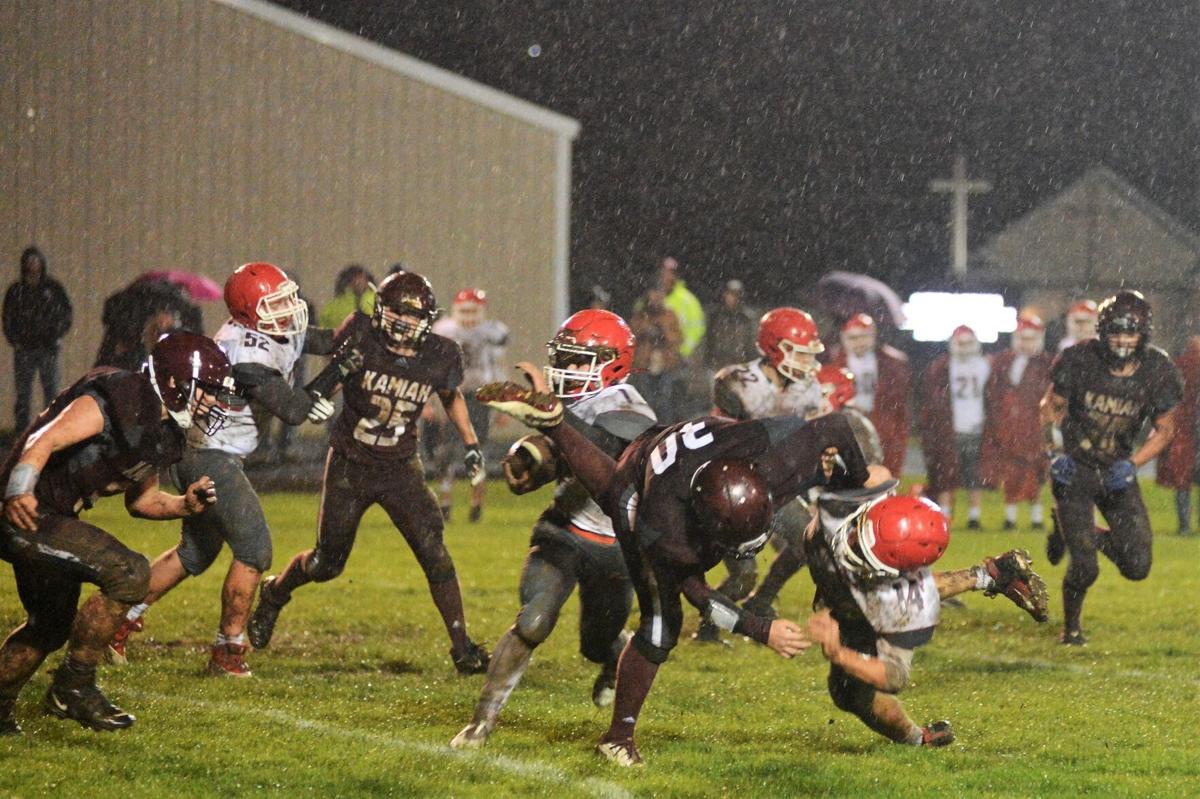 Kamiah's Colton Sams got past Clearwater Valley's Laton Schlieper on this play during Kamiah's 16-0 win over CV Oct. 23.

KAMIAH - A light rain grew heavier as the night went on, but by the time the wintry storm turned the North 35 yard line at the Bob Squires Sports Complex into a thick bog, the Kubs had already scored twice. As it turned out, two touchdowns were all there would be, as Kamiah prevailed over Clearwater Valley 16-0 on the last night of Whitepine League regular season play, Oct. 23.

The first of those early touchdowns came by way of a defensive stop that foretold an ugly truth about the way the game would play out: Just when CV's opening drive appeared to pick up some momentum, a botched snap forced the Rams into a punt. Kamiah's Gabe Eades threw to Kolby Hix for a long gain, then Landon Keen broke a long run that set up a touchdown. Keen punched it in from four yards out, and Eades followed with the conversion run for an 8-0 lead.

Kamiah's Bodie Norman stuffed a run on third-and-one to force CV's second drive into a three-and-out, after which Eades broke a 25-yard touchdown run, then threw to Keen for a 16-0 lead.

After that, the rain picked up and the north third of the field deteriorated, as CV and Kamiah retrod the same ground several times. Norman wrecked a Rams run in the backfield right after CV booked a first down, which was the big play during a series that ended on downs near midfield.

Kamiah took over at its own 45 with 1:40 on the clock, drew an encroachment penalty and appeared poised to embark on another drive - only to blow the snaps on the last play of the first quarter and again on the first play of the second. The later resulted in a turnover, and CV advanced sharply down toward the goal line only to be stood up at the Kubs' four.

Kamiah's ensuing drive wound about four minutes off the clock, as KHS moved out to the 35 before calling time out with 38 seconds left in the first half. A screen pass converted third-and-five, but an incompletion, a sack and another incompletion curtailed the scoring threat and the 16-0 score held at halftime.

CV tried an onside kick starting the third quarter; Kamiah recovered that, but fumbled away the opening possession. CV recovered a fumble of its own, but turned the ball over on downs. Kamiah went three-and-out. Keen recovered a fumble. CV stopped a fourth-and-one.

With about five minutes left in the third quarter, the Rams put together their best drive, as quarterback Aiden Martinez scrambled for a first down on fourth-and-long near midfield. But after a Rams timeout with about a minute left in the third, Martinez got sacked in the swamp near the north 35, and Kamiah took over at the CV 40 on downs just before the start of the fourth.

An exchange of four-down turnovers kept the outcome still in doubt when Kamiah took possession near midfield with 6:26 remaining. The Kubs started to milk the clock, so the Rams called a timeout facing fourth-and-two with 4:32 to go. A procedure penalty turned that into a fourth-and-seven, so Kamiah punted.

During the series that followed, the Rams had a big run called back for holding, then nearly had a swing pass intercepted, and that put the questions about the outcome to rest.

Kamiah (6-2) and Clearwater Valley (5-3) both have playoff possibilities; the Kubs secured second place in the Whitepine League with the win, while the Rams - and perhaps a fourth WPL team - may qualify based on computer rankings. The details remained to be determined as of Friday night.