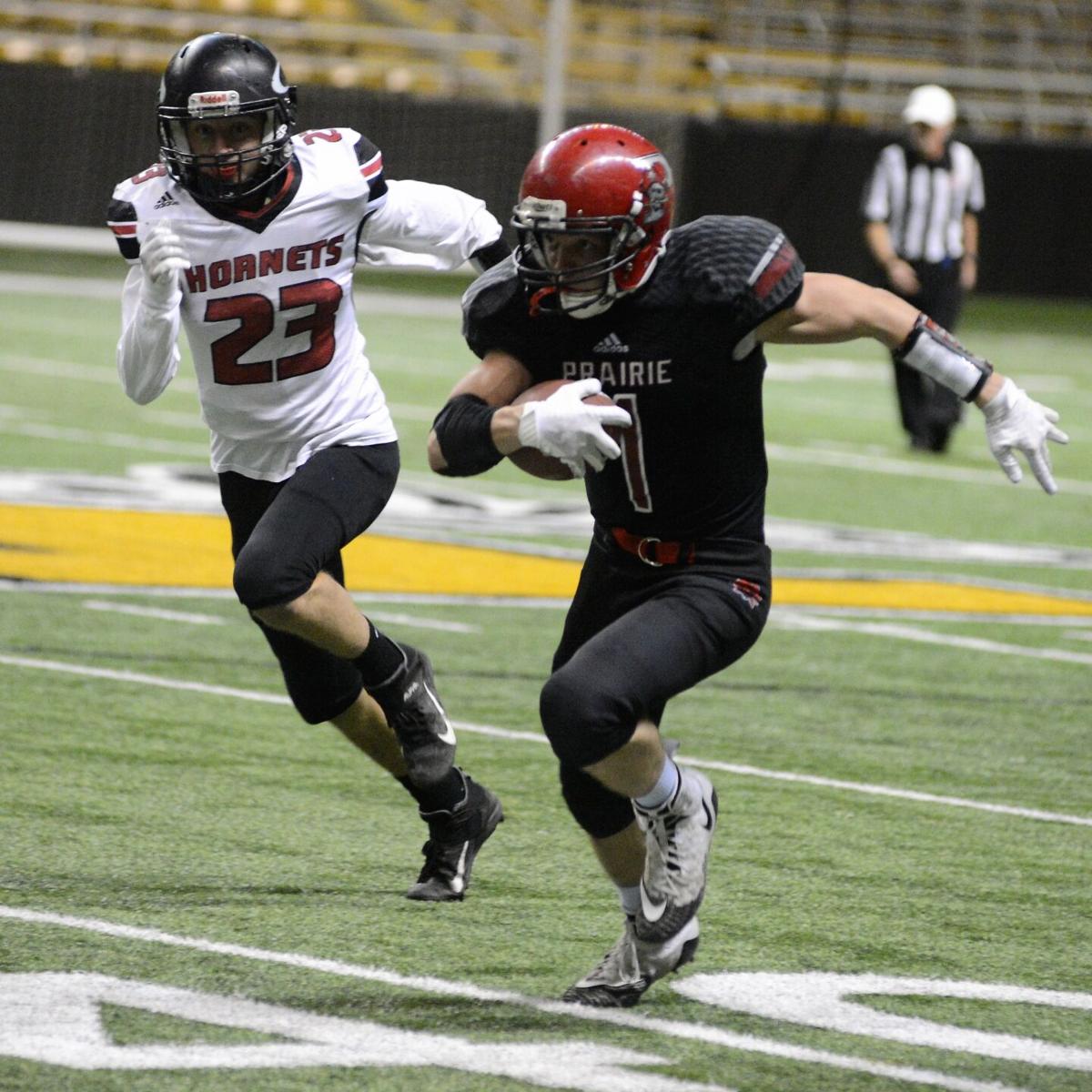 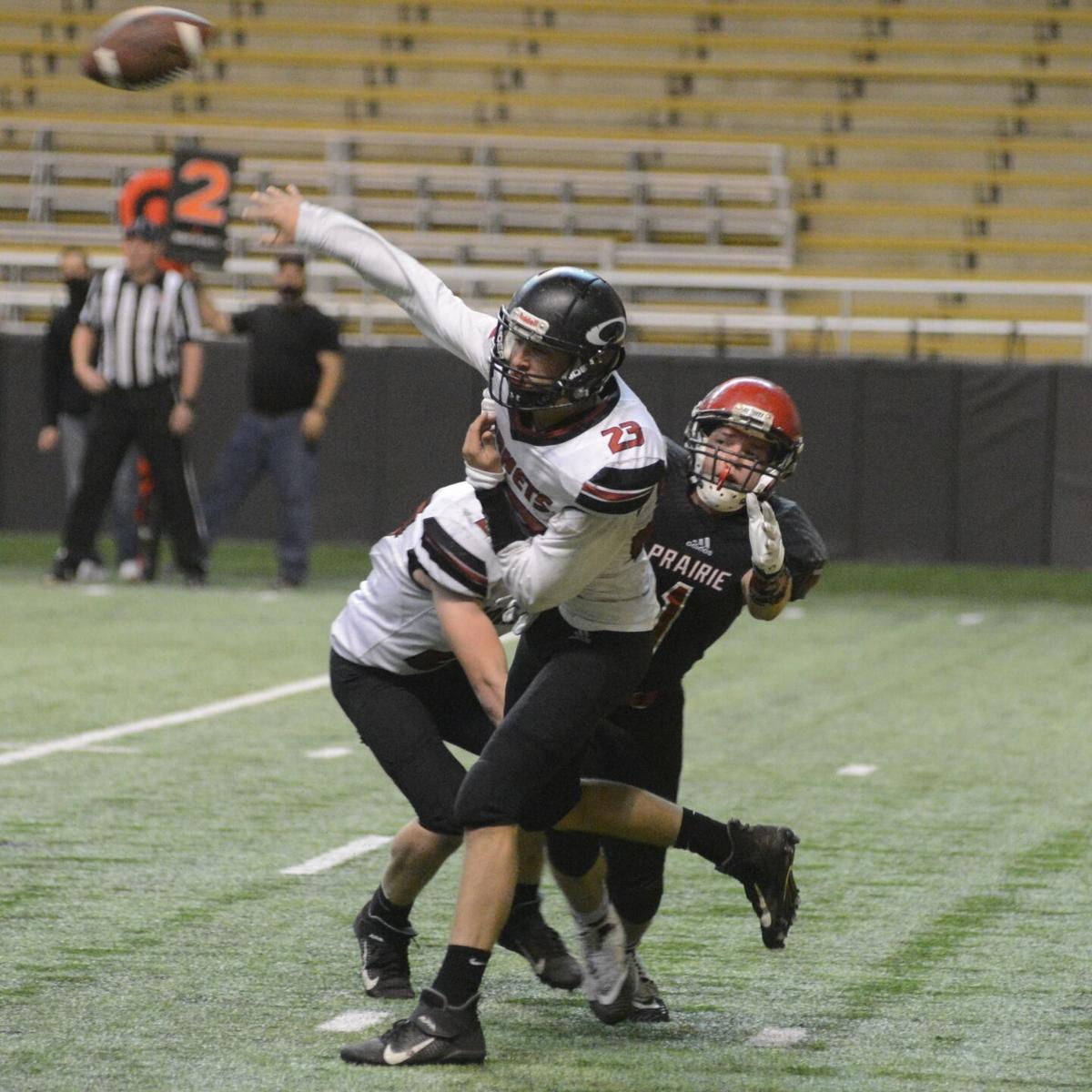 MOSCOW — Prairie’s return to the 1AD1 final to defend of its 2019 state championship looked inevitable despite extraordinary difficulty, until Oakley’s defense came out of a pileup at the goal line with a stunning fumble recovery against third-and-goal, one foot away.

Despite the early-season loss of ace running back and linebacker Cole Martin to a non-contact knee injury, despite the mid-season injury loss of senior end John Gehring, and despite the early-game loss of ace lineman Dean Johnson to a horrific leg injury last Friday night, the Prairie boys had Oakley right where they wanted them at the end of the Nov. 13 semifinal.

Down two points, 42-40, despite having appeared a step ahead of Oakley’s defensive adjustments for long stretches earlier in the night, Prairie’s offense took over at its own 23 with 8:20 left. The drive began with a penalty, which set PHS back to first-and-25 from the eight.

A swing pass from Cole Schlader to Brody Hasselstrom on third down looked to have converted that, but a penalty on that play left it at third-and-13 from the 20. A run for no gain made it fourth down, then Schlader’s pass to Hasselstrom made it first-and-10 at the 36. On second down, the Pirates avoided disaster when Chase Kaschmitter caught a deflected pass and advanced it to the Oakley side of midfield, first-and-10 at the 46.

Schlader carried again, to the two. Oakley called timeout with 41 seconds left. Prairie botched the snap, Oakley’s Isaac Mitton seized it in the end zone, and the 42-40 score proved final.

For the Pirates to have come so close was remarkable in of itself.

Johnson was taken off on a stretcher barely three minutes into the contest, screaming after an inadvertent and awkward collision with a teammate. When a medic asked him what was wrong, Johnson said, “Look at it!” gesturing at his leg, and no further explanation was required.

Somehow, after seeing the strongest of them downed, the Prairie boys came out of their huddle invigorated — and it took Oakley a couple of series to match the Pirates’ intensity. Schlader ran for a touchdown and a 6-0 lead on the play after the injury. Then the PHS defense forced a punt. The next play, Schlader threw to Tayden Hibbard, who ripped through the Hornets secondary for 52 yards. Oakley called a timeout, regrouped, and stopped the Pirates on third-and-goal at the three. Then Schlader threw to Dalton Ross for a touchdown on fourth down, and PHS led 12-0.

Oakley saved both of the point-after attempts during that first quarter, either of which might have altered the whole complexion of the end game. Prairie ended up two-for-six after its touchdowns, while Oakley went three-for-six.

Oakley scored a rushing touchdown on the second play of the second quarter, and Prairie answered with a 54-yard catch-and-run by Hasselstrom, a 15-yarder by Jesse Cronan, and 3-yard touchdown run by Schlader, who ran in the extra points for a 20-6 lead.

Oakley struck back with a short pass over the middle that went for a 44-yard touchdown and trailed 20-12.

Prairie’s next drive began with a “max protect” pass play that ended up called back for holding; four plays later, Hasselstrom broke a 62-yard touchdown run, to which Hibbard added the conversion, making it 28-12.

Coming out of a timeout at the Prairie 12 with about three minutes left in the second quarter, Oakley blew a third down play and wound up turning it over on downs to fine pass defense by Lane Schumacher.

Prairie went three-and-out, and Oakley punished a bad punt with a deep throw followed by a two-yard touchdown run plus the extra, closing within 28-20 with 40 seconds left.

Prairie fumbled on its own 15, but recovered, and went to halftime with the lead.

After two exchanges of turnovers starting the second half, Oakley’s Jace Robinson completed a 43-yard touchdown pass to Dace Jones, knotting the score at 28-28 with 4:20 left in the third.

Prairie countered with a 62-yard touchdown run by Hasselstrom.

The third quarter expired under a mountain of penalty flags, after which Robinson completed a 33-yard jump ball to Austin Cranney. Adding the conversion, Oakley led 36-34.

Then came the critical plays: Hibbard burst through the middle and zipped past the linebackers, who fell in a pile, scoring a 47-yard touchdown run, which put Prairie ahead, 40-36, with 8:39 remaining.

Then came Prairie’s march to the goal line, and so it went.