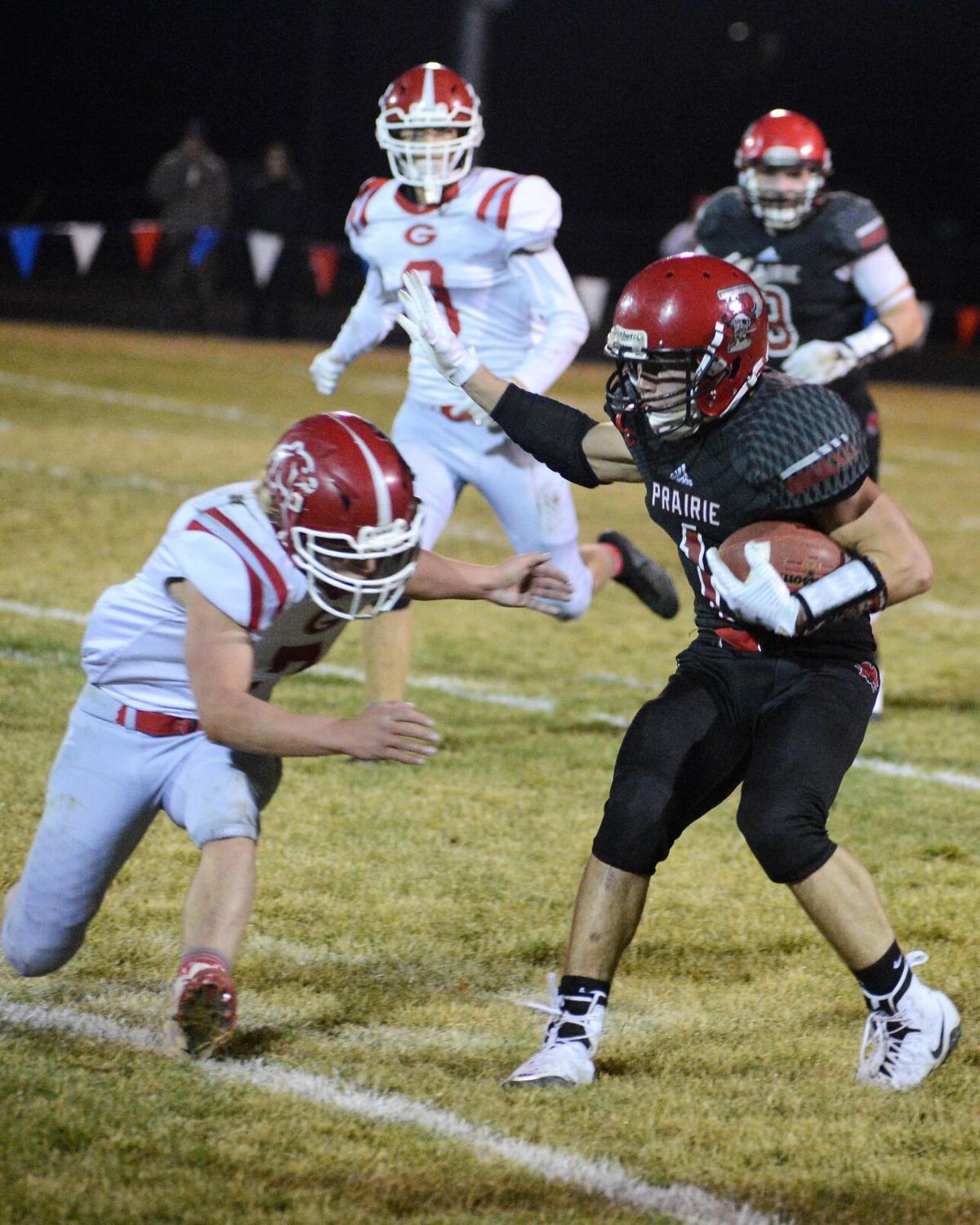 Prairie’s Tayden Hibbard scored twice during the Pirates’ win over Grace last Friday night, Nov. 6, by way of a 65-yard catch-and-run and by way of a 43-yard run. Pictured is Hibbard swatting aside a would-be tackler. 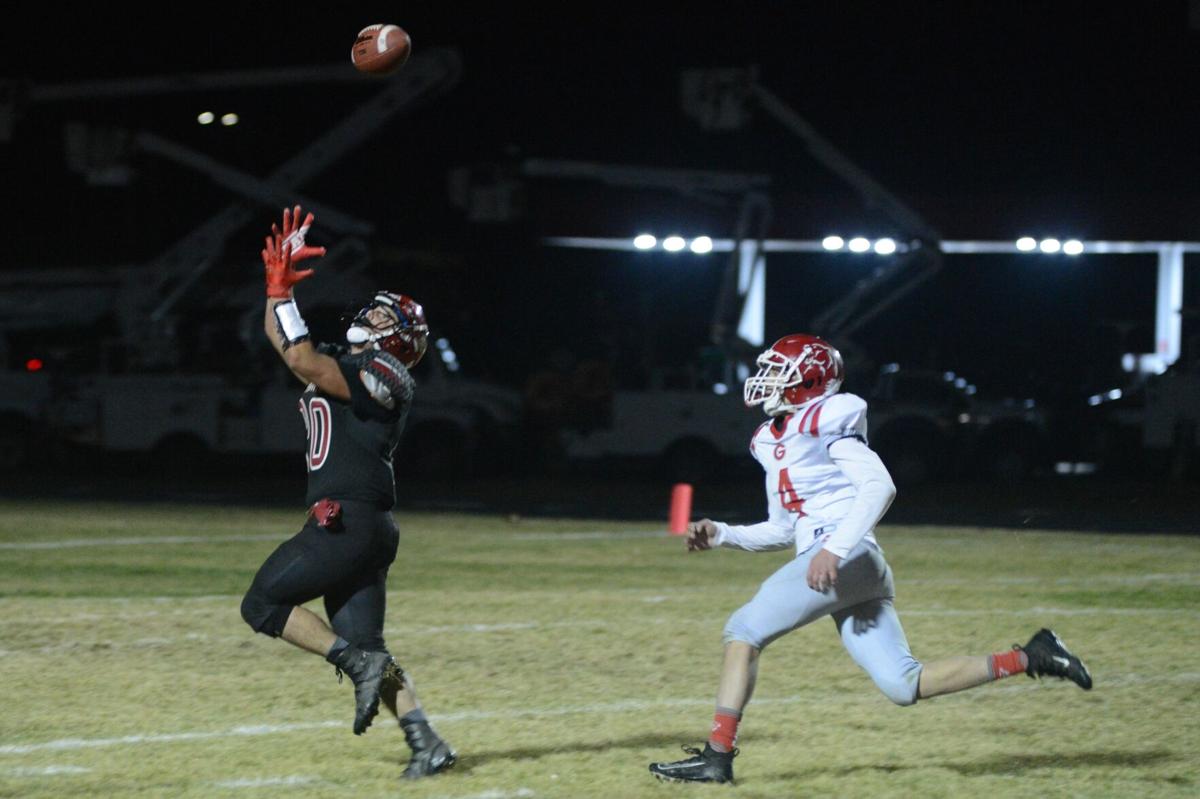 Prairie’s Brody Hasselstrom was in on five touchdowns, including runs of 27 and 37 yards, receptions of 39 and 61 yards, and a kickoff return of 65 yards. Pictured is Hasselstrom catching a deep throw from Cole Schlader.

Prairie’s Tayden Hibbard scored twice during the Pirates’ win over Grace last Friday night, Nov. 6, by way of a 65-yard catch-and-run and by way of a 43-yard run. Pictured is Hibbard swatting aside a would-be tackler.

Prairie’s Brody Hasselstrom was in on five touchdowns, including runs of 27 and 37 yards, receptions of 39 and 61 yards, and a kickoff return of 65 yards. Pictured is Hasselstrom catching a deep throw from Cole Schlader.

COTTONWOOD — Grace tried everything, and it worked for one drive. Practically everything Prairie tried last Friday night, Nov. 6, worked throughout, and PHS won 72-36. With the victory, the Pirates secured a semifinal chance against Oakley, details of which remained “to be determined” as of Monday morning, Nov. 9.

After the Grizzlies recovered the opening kickoff, Prairie was off-balance and the Pirates’ pass coverage was beaten three times during the first series. Prairie had forced what looked like a three-and-out near midfield, but blew the coverage against Grace’s punt formation, and so faced first-and-10 inside the PHS 20. The Prairie defense checked the first two plays, but gave away a first down by way of a pass interference penalty on third-and-four from the 12. Renewed with first-and-goal at the six, Grace ran three times at the heart of Prairie’s defense to no avail, but finally scored with a pass on fourth-and-goal from the one.

Grace had no such luck defensively.

After the second kickoff bounced out of bounds, Prairie’s blockers gave Cole Schlader all the time he wanted to step into a deep throw, which Tayden Hibbard hauled 65 yards for a 6-6 tie. Brody Hasselstrom converted the point-after run, making it 8-6, Prairie.

The ensuing kickoff dazzled Grace’s return team, and the Grizzlies offense took over with first-and-10 at its own nine. Prairie demolished the first down play, with Dean Johnson corralling the quarterback for a safety, which made it 10-6 and Prairie’s ball. With an option to punt or kick from a tee, Grace opted to punt, and the Pirates ended up first-and-10 at the Grizzlies’ 45.

Schlader’s pass to Hasselstrom broke the second play of that series — Prairie’s third play from scrimmage — for a 38-yard touchdown. That, plus a conversion pass from Schlader to Dalton Ross, made it 18-6.

The score was 26-6 with 3:13 left in the first quarter, and the contest was practically over. Grace trailed 46-6 during the second quarter, but persisted to the end. During the third quarter, after another safety, Hasselstrom returned a kickoff for a touchdown; he finished with five scores.

Prairie’s offense ended up with a combined average of more than 15 yards per play, bolstered by 283 passing yards on nine pass attempts and five completions, all of which went for touchdowns.

Schlader threw all five of those touchdowns including two to Hasselstrom and one apiece to Hibbard, Dalton Ross and Wyatt Ross.

Next, Prairie’s semifinal game will be held at either the Kibbie Dome — pending approval from University of Idaho and the North Central Idaho public health district — or Friday night, Nov. 13, at Lewiston High School. The details were still being worked out as of Monday morning, Nov. 9.